Three rogues and a priest 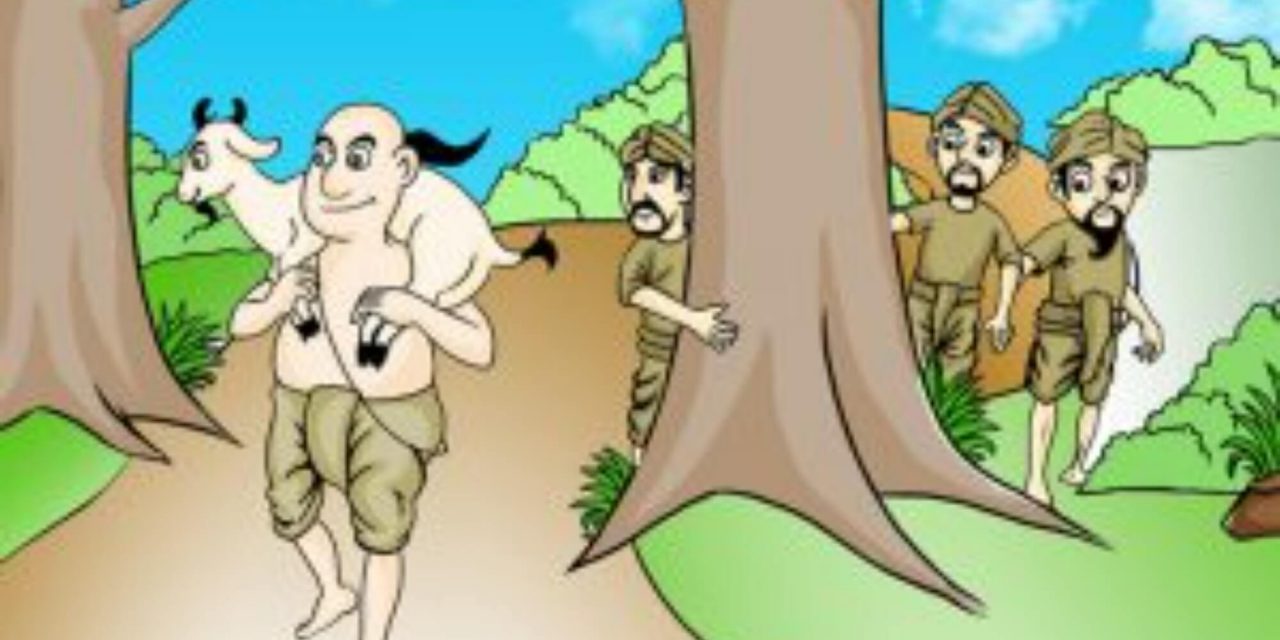 One day a Brahman received a goat as a gift. He picked up the goat and set out for home, carrying it on his shoulders.

Three rogues saw the Brahman carrying the goat. They were hungry. They wished they could get the goat for a meal.

“That’s a nice plump goat,” said one of them.

“Yes,” said another,” It would make a good meal for the three of us. But how can we get the goat? The Brahman will not give it to us.”

“Listen,” said the third rogue, “I have a plan.” The third rogue then whispered into the ears of the other two.

The other two rogues laughed. Then all three jumped up and hurried away.

The Brahman walked on.

Now one of the rogues suddenly came along and stood in front of the Brahman.

“Oh, holy sir,” said the rogue very politely, “Why are you carrying that dog on your shoulders? Isn’t a dog too unholy and unclean for a Brahman? I am very surprised to see you carrying a dog.”

“Dog?” exclaimed the Brahman. “What are you talking about? Are you blind? This is a goat. I just received it as a gift.”

The rogue quickly went away.

The Brahman walked on, muttering angrily to himself. A little further along the road, the Brahman met the second rogue.

“Oh, holy sir,” said the second rogue in a sad voice, “You should not carry a dead calf on your shoulders. You know, it is disgraceful for a Brahman to carry a dead animal.”

“What nonsense are you talking about? Are you blind? Don’t you know a live goat when you see one? This is a goat I have just received as a gift.”

“Please don’t get angry with me, sir,” replied the second rogue in a very humble voice. “Carry a calf, if you want to, a dead one or a living one. It does not matter to me. I’ll say no more. Please yourself.”

On walked the Brahman. He felt a little worried. From time to time he glanced at the goat. It was a goat all right.

But very soon he met the third rogue.

“Pardon me, sir,” said the third rogue, “but I must tell you that what you are doing is most improper.”

“Improper?” asked the Brahman. “What is improper?”

“It is not proper for a holy man to carry a donkey. A Brahman should not even touch such an unclean animal. You must know yourself. Put it down, sir, before anyone sees what you are doing.”

The Brahman was very puzzled. However, he was just too worried to be angry. This was the third man he had met. First a dog, then a dead calf, and now a donkey!

Was this a goat, then, a goblin or was it some sort of demon? Could itself into something different every few minutes? Perhaps these men were right, after all.

Greatly frightened, the Brahman flung down the goat and ran home as fast as he could.

The rogue picked up the goat and hurried back to his friends. They were happy at the success of their plan. They had a great meal that evening.